Take two smart creative women, put them in a car with an inquisitive two-year-old for 400 miles and ask them to come up with a tag line for their trip to Kansas. I should specify that both of these women work with language on a regular basis, and for one of them (me) it’s her job to connect words in interesting and entertaining ways. Yet all they – we – could come up with was Two Babes & A Babe-ette. Ah well. Now that it’s out there it’ll do.

Right now I’m sitting in Joanna’s dad’s house (you’ll be hearing much more about this piece of history later) before the day begins and I’m reflecting on our trip so far. We took two days to travel about 750 miles because we wanted to know we could stop wherever we wanted along the way, and we did.

Our first stop on Wednesday was Dixon, Illinois, the boyhood home of Ronald Reagan. Our decision to stop here was based on two things: there was historical significance and it was time for lunch. We pulled into a public lot next to the Rock River, headed down to the bank and ate Joanna’s packed lunch of ham, cheese, orange peppers, English cucumbers, and a tomato and basil salad fresh from her garden while fishermen hunted for the best spot and two men tried to wrest a tree off the dam.

Refreshed, and feeling like we were just getting started, we headed back onto the Chicago-Kansas City 110. This is a new route that links several highways to connect the two cities. Over the next two days it would feel more like just another mapped route, but Joanna did say it was faster and definitely more scenic than the route she would normally take to get to Hutchinson.

The Illinois portion ends at Hannibal, Missouri, and that was our next stop. We followed the historic markers, looking for Mark Twain’s boyhood home. As we were nearing the site of the author’s beginnings we saw a building that said “Train Town”. Screech – stop – turn! Dani LOVES trains. Loves them like a cat loves a string dangled in front of its nose.

We browsed the tiny store’s collection of old and new and Joanna picked out a few toys for her daughter to play with in the car. After she paid, the thin, weathered woman behind the counter got a gleam in her eyes and said “since you’re a paying customer…”. Then she moved a box fan away from a heavy blue curtain and revealed a room filled with trains and train sets and train layouts.

We stepped into this wonderland with awe as our hostess showed us all the buttons we could push to make beacons light up and crossing guards go down and conductors emerge from the stations. I fondly remembered my father’s elaborate layout in our old house in Carmel, Indiana. We marveled at the sheer number of trains, some of which dated from 1948. One of the static displays included the only pink one Lionel ever made.

We left with a happy kid and a bag full of train toys to see where Samuel Clemens grew up and his inspiration for Tom Sawyer and the rest. The lady at Train Town had warned Joanna that it was super tourist-y, but we didn’t care. As a writer just walking the same ground that one of the greats did ties me to the ephemeral sense of kinship. We took the requisite pictures and headed back on the road. 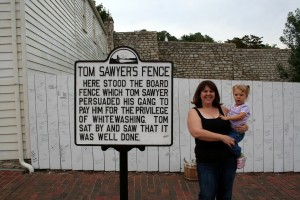 Finally around 7pm we rolled into Macon, Missouri and checked into our hotel. On the Writing The Rails tour I learned that Super 8’s are pretty consistently clean and inexpensive and they offer a continental breakfast and, most importantly, free WiFi. They’re also individually owned so each one is a little different. This one’s most charming feature was that each room was themed. We stayed in “A Pheasant Place”, complete with a wallpaper border of yes, pheasants.

After putting Dani to bed and groggily eating Mexican we crashed, exhausted, by 9:30pm, so we could awaken early the next morning and complete our journey to Hutchinson.

I'm the founder and publisher of The Local Tourist and author of the Two Lane Gems book series. When I'm not telling people where to go, I'm planning my next adventure.

Hi! I'm Theresa.  I've been telling people where to go since I was a little girl. Just ask my parents. And my brother. (Um. On second thought, don't ask him.) A … END_OF_DOCUMENT_TOKEN_TO_BE_REPLACED